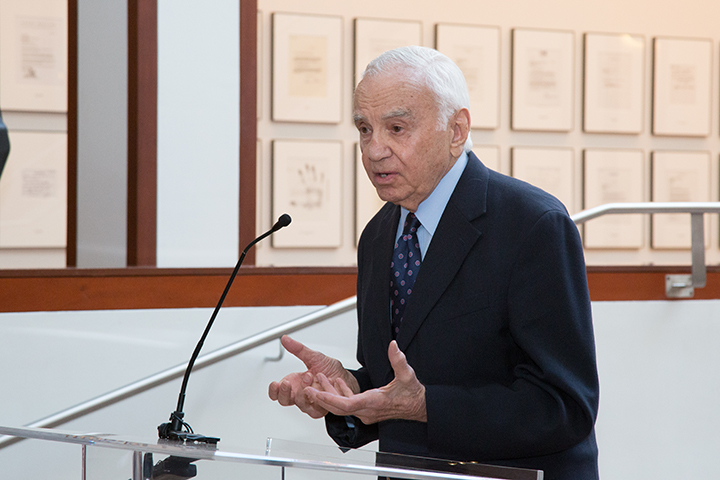 The American Academy of Arts and Sciences has received its largest single donation since its founding in 1780.  The Jack, Joseph, and Morton Mandel Foundation, based in Cleveland, Ohio, has donated $5.6 million to establish the Morton L. Mandel Program for Civic Discourse and Membership Engagement. The endowment will strengthen and enhance the connection among the American Academy’s more than 4,600 Fellows and increase its engagement with the general public.

The hallmark of the Mandel Foundation’s philanthropy is its commitment to invest in people with the values, ability and passion to change the world.  The foundation sees those values, ability, and passion in the exceptional Fellows and the substantive programming and initiatives of The American Academy of Arts & Sciences.

“This generous gift takes our ability to convene national and international leaders and facilitate important and relevant discussions to a new level,” said Don Randel, Chairman of the American Academy Board of Directors.

Every year since its founding, the American Academy inducts new Fellows from among the nation’s most distinguished scholars, artists, scientists, and government and business leaders. With its $5.6 million gift, The Mandel Foundation aims to provide more opportunities in which Academy Fellows can exchange knowledge and expertise and advance new ideas.

The Academy’s founding members include John Adams, John Hancock, and James Bowdoin,” said Jonathan Fanton, President of the American Academy of Arts and Sciences. “We take seriously the purpose and mission these leaders gave us ‘to cultivate every art and science which may tend to advance the interest, honor, dignity, and happiness of a free, independent, and virtuous people.’”

The major portion of the gift, $5 million, will be an endowment and will fund two new positions:

In addition, The Mandel Endowment will support the Distinguished Morton L. Mandel Annual Public Lecture, which will be streamed internationally, as well as a series of regional lectures. The lectures will strengthen the Academy’s role in promoting discourse with the general public on important issues facing the nation and the world.  The lecture series is expected to debut in November of 2015.

The remaining $600,000 will be used to fund state-of-the art technological improvements to the House of the Academy in Cambridge, Massachusetts. These include significant upgrades to live, interactive, streaming capabilities; teleconferencing; digital audio and video recording; and networking platforms.

“The Mandel Program for Civic Discourse and Membership Engagement will connect the Academy’s extraordinary membership with the public to discuss critical issues facing our country and the wider world.  The need for rational, evidenced-based conversations about both challenges and opportunities has never been greater,” added Fanton.

Drawing from every field of research and professional practice, The American Academy convenes scholars, artists, policy-makers, business leaders, and other experts to examine the most pressing problems facing our nation and our world.

The recently issued report, Restoring the Foundation: The Vital Role of Basic Research in Preserving the American Dream, addresses the dangerous downward trend in funding in the United States for basic research and its effect on America’s ability to innovate and compete. The nationally hailed report, The Heart of the Matter: The Humanities and Social Sciences for a vibrant, competitive, and secure nation, looks at a lessening of appreciation for the valuable role of the Humanities and Social Sciences in creating an informed and engaged citizenry able to support a democratic government. The Global Nuclear Future project is an ongoing—and timely— multinational initiative that seeks paths to permit the peaceful use of nuclear power to meet the growing demand for energy, while minimizing the potential adverse consequences of the spread of inherently risky technology

“With this gift from The Mandel Foundation, we are eager to begin realizing the new opportunities for greater communication and interaction with our members and the public,” said Fanton.

The Jack, Joseph and Morton Mandel Foundation is happy to announce the launch of the…

The Jack, Joseph and Morton Mandel Foundation is pleased to share its 2017 Annual Report,…