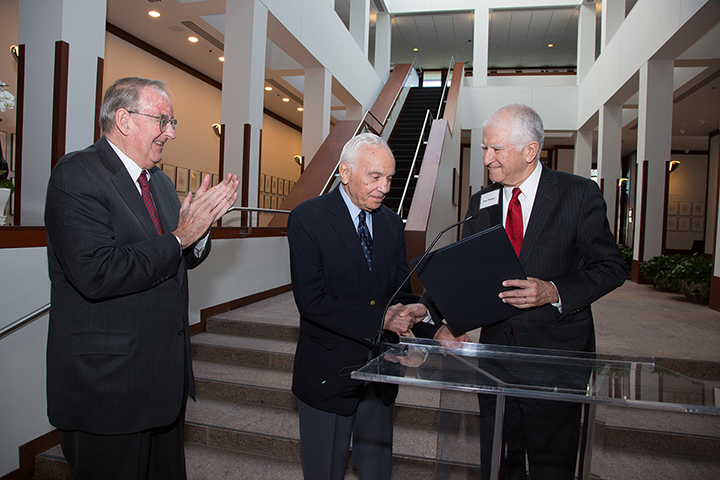 The American Academy of Arts and Sciences has named business leader and entrepreneur Morton L. Mandel as the recipient of its Scholar-Patriot Award in recognition of his philanthropy and dedication to public service. This award  was presented to Mr. Mandel on January 11, 2016 by Academy President Jonathan F. Fanton and Chair of the Board of the Academy Don M. Randel at a ceremony at the Academy’s headquarters in Cambridge, Massachusetts.

The Scholar-Patriot Award is given for extraordinary contributions of individuals who share the vision of service held by the founders of the American Academy. Previous recipients of the Scholar-Patriot Award include cellist and educator Yo-Yo Ma, former U.S. Senator Edward M. Kennedy, and William T. Golden, a leading architect of 20th-century American science policy.

Morton Mandel is Chairman and Chief Executive Officer of Parkwood LLC, headquartered in Cleveland, Ohio. With his brothers Jack and Joseph, he founded the Premier Industrial Corporation, which later became one of the world’s leading industrial parts and electronic components distributors. Morton Mandel served as Chairman and Chief Executive Officer of the Corporation from 1957 to 1996, when it merged with a British company.

Mandel also serves as the Chairman and Chief Executive Officer of the Jack, Joseph, and Morton Mandel Foundation, which funds numerous social leadership initiatives in the United States and Israel. The work of the Foundation is grounded in the belief that exceptional leaders, inspired by powerful ideas, are key to improving society and the lives of people around the world.  In addition to the American Academy of Arts and Sciences, organizations that have received philanthropic support from the Mandel Foundation include Brandeis University, Case Western University, the Cleveland Clinic, Hebrew University, and the Mandel Leadership Institute in Jerusalem.

“The American Academy of Arts and Sciences was founded by patriots who devoted their lives to ‘cultivate every art and science which may tend to advance the interest, honor, dignity, and happiness of a free, independent, and virtuous people,’” said President Fanton. “The Academy established the Scholar-Patriot Award in honor of those founders and their vision of service to our fledgling nation. Recipients of this award are in that distinguished company, characterized above all by their service to others. For his model of leadership in business as well as his leadership in philanthropy, Morton Mandel is most deserving of this honor.”

“Through his generous support of greater engagement among the Academy’s members, Mort Mandel has unlocked the potential of our distinctive membership,” said Don Randel, Chair of the Board of the Academy. “He has taken to a new level our ability to gather leaders from around the world and facilitate discussions of issues, both current and abiding, through which the Academy may advance the common good.”

Founded in 1780, the American Academy of Arts and Sciences is one of the country’s oldest learned societies and independent policy research centers, convening leaders from the academic, business, and government sectors to respond to the challenges facing the nation and the world. In its work, the Academy focuses on higher education, the humanities, and the arts; science and technology policy; global security and energy; and American institutions and the public good. Academy research has resulted in reports like The Heart of the Matter and Restoring the Foundation: The Vital Role of Research in Preserving the American Dream. Projects under the guidance of the Academy’s Committee on International Security Studies address the impact of energy and security technologies on global prospects for peace and prosperity. The Academy’s work is advanced by its more than 5,000 elected members, who are leaders, from around the nation and the world, in the academic disciplines, the arts, business, and public affairs.

The Jack, Joseph and Morton Mandel Foundation in Israel hosted a virtual memorial ceremony to…

Morton L. Mandel Shares Business and Leadership Knowledge in His Book, “IT’S ALL ABOUT WHO”

American business entrepreneur and philanthropist, Morton Mandel shares lessons he, with his brothers, Jack and…

On October 10, 2018, the third Morton L. Mandel Award for Outstanding Chemistry Faculty was…