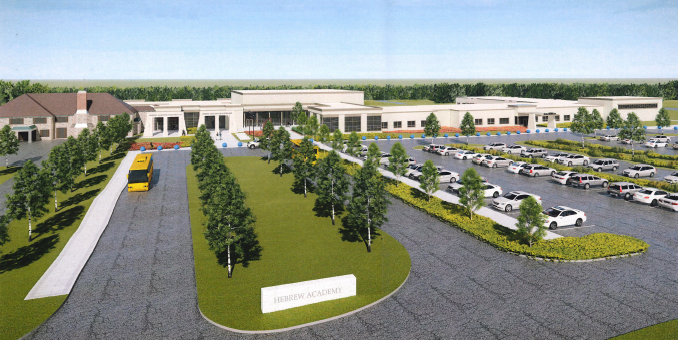 The Jack, Joseph and Morton Mandel Foundation announced a capital grant of $4.5 million to the Hebrew Academy of Cleveland towards the construction of a new early childhood and elementary school on the site of the former Oakwood Country Club which the Academy acquired in 2014. The new building will be named the “Simon and Rose Mandel Building” perpetuating the memory of the parents of the Mandel brothers.

Founded in 1953 by Jack, Joe and Mort Mandel in Cleveland, the Mandel Foundation’s philanthropic work is devoted to leadership development, management of non-profits, humanities, Jewish life, and urban engagement. The Foundation supports initiatives that helps successive generations discover the meaning and significance of Judaism and Jewish culture, which contributes to the vibrancy of Jewish communities.

“Jack, Joseph and Morton Mandel were raised by parents committed to Judaism and the Jewish people. The brothers perpetuated their values in their own philanthropy,” said Jehuda Reinharz, President and CEO of the Mandel Foundation. “For almost 80 years, the Hebrew Academy of Cleveland has worked with Jewish youth to instill values and develop strong character to create engaged and principled citizens. I know it would bring the brothers great joy to see their parents’ names displayed on such a respected institution.”

Founded in 1943, Hebrew Academy of Cleveland is Ohio’s largest Jewish day school and a national leader in Jewish day school education. An unprecedented increase in enrollment in recent years resulted in a maximum use of capacity at the Academy’s three campuses in Cleveland Heights and Beachwood. The Academy previously acquired the 92 acre Oakwood Country Club and refurbished its Clubhouse to house some 250 students while maintaining the architectural grandeur of the facility. Current architectural drawings and construction plans call for the construction of a 100,000 square foot building adjacent to the former Clubhouse that will house the school’s early childhood and boys elementary school divisions.

Rabbi Simcha Dessler, Educational Director of the Hebrew Academy, remarked “The Mandel Foundation’s capital grant, for which the Academy leadership is exceedingly grateful, will perpetuate the names of Simon and Rose Mandel while educating, inspiring and empowering thousands of students in this generation and beyond with a promising Jewish future. Our students, the true beneficiaries, are the leaders of tomorrow and the grant represents an investment in a Jewish future. “

Amir Jaffa, Chairman of the Hebrew Academy’s Vision 2020 Capital Campaign, expressed “The Mandel Foundation’s leadership gift is indicative of its remarkable commitment to building and energizing the Jewish community. With commitments for eighty percent of the campaign goal, we continue to count on the generosity of the broadest spectrum of the community to bring this transformational project to fruition.”

The Jack, Joseph and Morton Mandel Foundation is the Title Sponsor of “Cleveland Starts Here” at the Cleveland History Center in University Circle

The Western Reserve Historical Society (WRHS) is pleased to announce that the Jack, Joseph and Morton…

The Jack, Joseph and Morton Mandel Foundation has awarded a $5.25 million gift to Brandeis…

The Jack, Joseph and Morton Mandel Foundation, one of the country’s leading philanthropies, has awarded…